skip to main | skip to sidebar

Portrait of an Artist on his Birthday 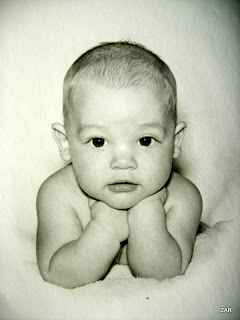 I guess we should have known that The Great Chet (aka Birthday Boy) would be involved in some artistic endeavor; from the age of three he was curiously investigating things and drawing them. And I remember the first photograph he took - I think he was about 7 years old - we were walking around looking at some shops when he asked to use the camera for a picture he needed to take. His dad hung the heavy camera around Chet’s neck and we watched as he took a shot of an old, beat up tennis shoe lying in the gutter – even then he had an eye for the unique.
Chet also spent hours creating unusual things from wood, wire, batteries, pieces of concrete, food items, etc, etc – nothing was off limits when it came to his vision. He made heads from latex, monster makeup, fake blood, even a movie starring his friend, Chris, (who, being naturally artistic himself allowed Chet to stuff watery cream of rice cereal into his mouth) as Chet filmed the sequence between bouts of hysterical laughter. Chet was never lacking in the sense of humor department. I remember the time he walked in, started a conversation with us and once he had our full attention he turned sideways, revealing that half of his head was shaved – causing his dad to yelp in shock which was the hilarious reaction Chet was looking for. Which reminds me of the other painter in the family, Chet’s dad, Jim. Chet and his brother, Jack, always delighted in Jim’s painting skills as well as his personal quirks. If the boys knew Jim was going to pick up food from the Drive-Thru they’d gather up the neighborhood kids and sit on the porch awaiting his return. When Jim would show up without the food (which he did nearly ever time) they’d casually ask, “Where’s the food?” then laugh themselves silly as Jim ran back to the car and took off with a roar.
Speaking of Jim, I’m putting my blog on hold so that I can work with Jim on his blog (www.zarsart.blogspot.com) it seems that I can only handle one important job at a time (could it be that years of exposure to all this creative zaniness has caused a disconnect in my smart cells?)
HAPPY BIRTHDAY, CHET - we love you!
Posted by recklessspinner at 7:51 AM 2 comments: 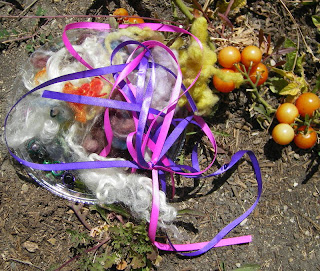 Sometime during the night the tiny bag I’d found (dropped by Miss Ebha when she ran from me) was retrieved and evidently returned to her. In its place in the garden was a little pile of interesting odds and ends: some hand spun wool of a bumpy nature, ribbons, and beads. Beneath the handmade paper was a note left by Liam McSpinagain.
“Dear Artisan,” it said, “Miss Ebha will be glad to have her dear bag back. ‘But I’ll not thank her,’ she said, ‘for returnin’ to me what was mine to begin with!!’ She’s a tough cookie, our Miss Ebha is.”
“But she did ask me to leave you these few things – yarn, beads and such. ‘If she wants an evening bag so blasted bad,’ Miss Ebha told me, ‘let her be makin’ her own!’
“So I’m leavin’ you the makings of a nice, wee bag for yer very own. And as I told ye we’ll never again speak of the terrible thievin’” - Liam McSpinagain.
Since it seems unlikely I’d ever be able to convince them that I’m not a thief I think the best thing to do is forget the entire matter and focus on trying my best to duplicate Miss Ebha’s evening bag.
Posted by recklessspinner at 10:55 AM No comments: 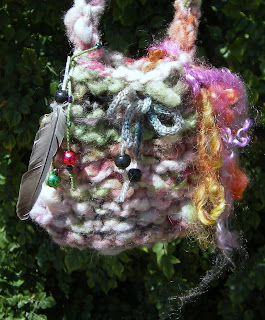 I’m so embarrassed! This morning I found a note in my garden and this is what it said: Dear Artisan – It is with great trepidation that I broach this subject, but seeing as me position dictates, I fear I must. You have been accused of thievery – I know it can’t be, but our Miss Ebha has filed a complaint against ya…she says you have stolen her precious evenin’ bag, the one with the beads and the rest of the miscellaneous trifles. Oh, and a found feather, found plain and simple on the forest floor (we wouldn’t be caught dead killin’ another; we’re not that kind!). Now Artisan, I know Miss Ebha tells the tale many a time (in fact Ebha in the ancient tongue means provider of life, but to her back we call her provider of lies, she’s that big a fibber) and I know she had no business on yer estate but she’s our official strawberry wine taster and a good wine taster she is, too. And it seems that she got carried away with the wine tipplin’, turned herself ‘round and instead of taken’ to her bed in the wee hours she landed in yer garden. So if you’ll just be returnin’ the darlin’ wee bag, Miss Ebha can get back to supervision’ the strawberry stompin’ and we’ll not speak of this matter again..and that’s a promise. Liam McSpinagain.
Surely, he doesn’t think that I stole it! Surely he doesn’t. Needless to say I immediately put the little bag back in the garden.
Posted by recklessspinner at 11:25 AM No comments: 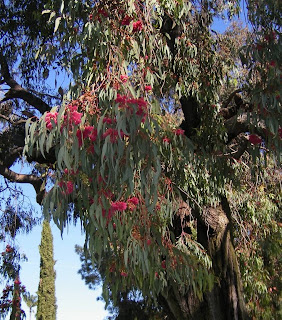 The neighbor’s dog got loose this morning, before the sun was even up. I had just gotten out of bed and was on my way to the kitchen for my coffee when I heard loud barking coming from my backyard (I always leave the side gate open so the raccoons and friends can get to the water we leave out for them…and so the wildlife coming the opposite direction can get through to the front where they hang out together and watch the coming and goings of the night owls – the human ones, that is).
I grabbed my robe and hurried out the kitchen door, concern that the dog had cornered one of the feral cats - but to my surprise what the neighbor’s dog was barking at wasn’t a cat or a critter at all…it was teeny, tiny woman! And she wasn’t cornered, but instead she was staggering around the yard in dizzying circles mumbling to herself.
“Now Ebha, sweet lass that ya are, you got here by some entrance, sure that ya did and you can leave by same…if only you can find the blamed place!” she cried.
The neighbor’s dog had stopped barking and had parked himself on the lawn and with head cocked to one side was listening as if the little woman was speaking to him.
I stayed motionless, certain that once the little woman moved a smidge to the left she’d see the opening in the fence and from there the trip back to the forest was all downhill – literally. But after watching her bump into an especially large kale and fall over backwards, I knew something had to be done before the little thing suffered a grievous injury, so I coughed softly and pointed toward the opening in the fence. Poor thing! When she turned and saw me, she scrambled to her feet, dashed in, out and around the carrot tops and streaked out of the yard.
I watched her as she tumbled down the embankment spewing words in a language I couldn’t understand (which was probably just as well) and finally disappear among the trees.
When I started back to the house I saw that she had dropped her purse, a rustic, hand spun, woolen bag. Afraid that the neighbor’s dog would drag it off I brought it inside. And here it sits.
Posted by recklessspinner at 5:12 PM No comments:

NOISES FROM THE FOREST 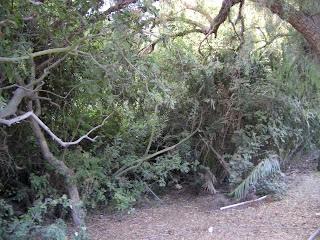 I’m worried about the beings living in the forest. I feel sure they’re getting ready for their Strawberry Wine Festival but I’m afraid their boisterous preparations are going to bring the authorities down on them. As along as my neighbors don’t complain about the noise there shouldn’t be a problem but if things get much louder somebody will complain, for sure. And of course a call to the sheriff might not be a call of complaint, but rather a call of concern; the noises echoing out of the forest and up the embankment are bizarre indeed. Last night we were awakened by the sound of drumming as well as a tinkling noise as if made by tiny bells or miniature cymbals, the rhythm quickly followed by clapping and raucous giggling. I know they’re just having fun but I am concerned about their welfare – although maybe I shouldn’t worry, I can’t imagine a full sized person actually catching one of them. And if they did, where would they lock them up? In a shoe box?
Posted by recklessspinner at 10:05 AM No comments: 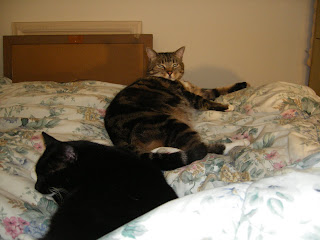 Fang (as a teenager) moved in with us about two years ago. He’s an unusual looking cat; white with a tan spot on his head and a tan and white striped tail. And then there are his teeth: teensy, tiny, baby teeth that prevent him from eating dry cat food and two long, protruding fangs that would make a vampire jealous.
On one hand he’s sweet and affectionate – resting his head against your cheek when you hold him. On the other, he’s a vicious tyrant, attacking anything and anybody - including me: trying to suddenly bite me when only seconds before he loved being petted. Taking savage swipes at me when I walk past. And the feral cats? He’s gone after their jugular on more than one occasion.
Maybe it’s those huge fangs that have given him the idea that he can get away with being such a bully. Then again, maybe it’s his baby teeth that prevent him from chewing properly that have made him so angry. Whatever it is, he’s a pill!
One day I looked down the embankment and caught him entering the forest. I tried to call him back, but of course he ignored me. Within seconds he came tearing out of the trees, ears flat, tail fluffed to the size of a feather duster. Close behind him I saw a flash of purple. It seems that one of Liam McSpinagain’s rainbow sheep have finally put Fang in his place – but who knows how long that will last (as the two cats in above picture can verify, you must remain ever vigilant when Fang is around).
Posted by recklessspinner at 8:44 AM No comments: 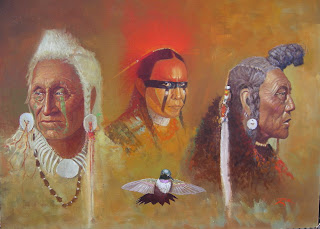 It seems we’re having a run of luck…a lucky streak, in other words…not good luck mind you, but luck just the same.
First there was the egg recall and then during our terrible heat wave we’ve lost our electricity two days in a row: no fans, cooler, refrigerator, cooked food…no anything…including no lights to do anything. Pretty boring. And the only info from the electric company was that they didn’t know what was wrong and they didn’t know when it would be repaired, they only knew that there was a problem.
At least when we lived in Taos and the electricity went out it was because of an electrical storm. And even when it was pitch black we could entertain ourselves by watching the lightening flashes through the canyon miles away. It was like watching a war where people were seldom injured and homes were seldom harmed – now that’s a war I could live with.
Posted by recklessspinner at 11:54 AM No comments:

recklessspinner
I live with my husband, internationally known artist, James Zar. I have three children and seven grandchildren. I've had five novels published and my play, THE PHONE CALL, was directed by five-time award winning director, Jackie Cowgill. I'm listed in the 58th edition of Who's Who in America. If youpre interested in purchasing one of my novels go to: http://www.jameszar.com/files/PURCHASE_JUDY.html